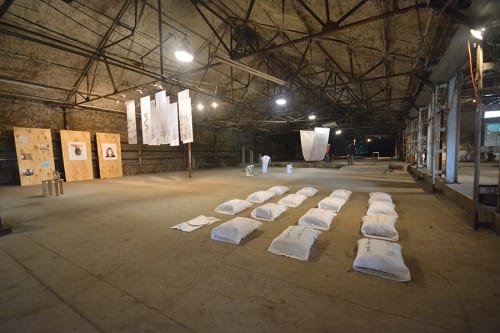 One of the common shortcomings of studio art education is the way in which the scope and scale of a student’s work is dictated by his or her facilities. Students and instructors alike fall into a comfortable sufficiency defined by parameters of the classroom. Art students are also often sequestered away from the public, forsaking engagement with the local neighborhoods surrounding their universities. The ongoing story of Temporary Collectives, a dynamic intercollegiate graduate project involving professors and students from six major universities in North Texas, exemplifies the potential for new interdisciplinary strategies in graduate education. Temporary Collectives is a project that attempts to address these issues while simultaneously engaging with one of Dallas’s most diverse communities.

Students are selected by their graduate committees each year for participation in the project. After a three-minute slide presentation where the students meet each other, often for the first time, they are placed into groups intentionally assembled from different programs and media. They must learn to work together. Given choices of space, theme, and content, they are expected to organize and promote their own installations while being mentored by their group leader.

Strategically, the Temporary Collectives exhibition runs concurrent with the Dallas Art Fair each April. In conjunction with the Dallas Art Fair, Temporary Collectives hosts a panel discussion about the project as a part of its commitment to ongoing educational programming. Other cultural institutions have taken notice: the Nasher Sculpture Center in Dallas recently provided in-kind support and event programming, including tours of the exhibition with their Avant Garde Society. As the project continues to evolve, efforts to engage the Dallas Office of Cultural Affairs and other universities are being made. To date, more than one hundred students have taken part in this project, and its success is quantifiable. Former students have gone on to collaborate with each other, open artist-run spaces and organizations, and exhibit within the greater Dallas–Fort Worth area.

—Darryl Lauster, University of Texas at Arlington, on behalf of Temporary Collectives